Detroit City FC will air men’s and women’s matches live on regional networks across the state of Michigan for the first time in Club history. 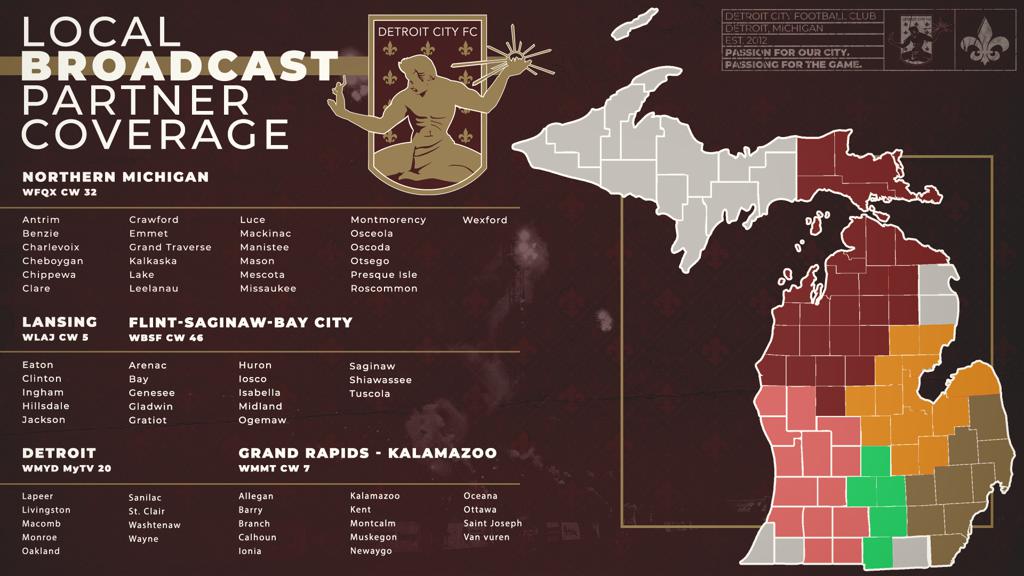 DETROIT, Michigan - The reigning National Independent Soccer Association (NISA) Fall and Independent Cup Champions, Detroit City Football Club, is partnering with regional networks across the state of Michigan to air live matches for the 2021 season. For the first time since the Club’s founding, both men’s and women’s matches will be available across all of Michigan’s Designated Market Areas: Detroit, Flint, Grand Rapids, Lansing and Traverse City. Supporters can expect up to 12 matches in each market.

Additionally, with the exception of nationally broadcast matches, all DCFC home matches will be live streamed on the Club’s YouTube page.

Detroit City FC Men play a national schedule in NISA. Le Rouge has an all-time winning percentage of 72% and won the Fall and Independent Cup Championships during their first year of competition in NISA (2020). As the 2020 Fall champions, DCFC has secured a berth in the July 3rd, 2021 NISA Championship match at Keyworth Stadium.

Detroit City FC Women play a regional schedule as a part of the United Women’s Soccer league. The 2021 season will run from May through July. The Le Rouge Women are looking to build on last year’s inaugural season.

“We are thrilled to evolve our broadcast and streaming strategy to reach supporters statewide and beyond,” said T.J. Winfrey, Detroit City FC Chief of Partnerships. “Our grassroots origin is a story that resonates in many communities, creating connections to Detroit City FC that promotes the growth of soccer.”

Google Fi, a phone plan by Google, has partnered with Detroit City FC to be the presenting sponsor for statewide broadcasts and streamed home matches. Google Fi will be the Official Mobile Service Provider of Detroit City FC for the 2021 season.

Founded in 2012, Detroit City FC has established itself as one of the most talked about soccer teams in North America. The club’s motto, Passion for Our City, Passion for the Game, evokes the three ideas the grassroots organization was built upon: to satisfy the demand for soccer in Detroit, represent the city in a positive light, and build community through the beautiful game. Detroit City FC includes a men’s professional team, women’s senior team, men’s U-23 team, women’s reserve team, an Academy and 5 affiliated Youth Clubs.

Google Fi is a trademark of Google LLC