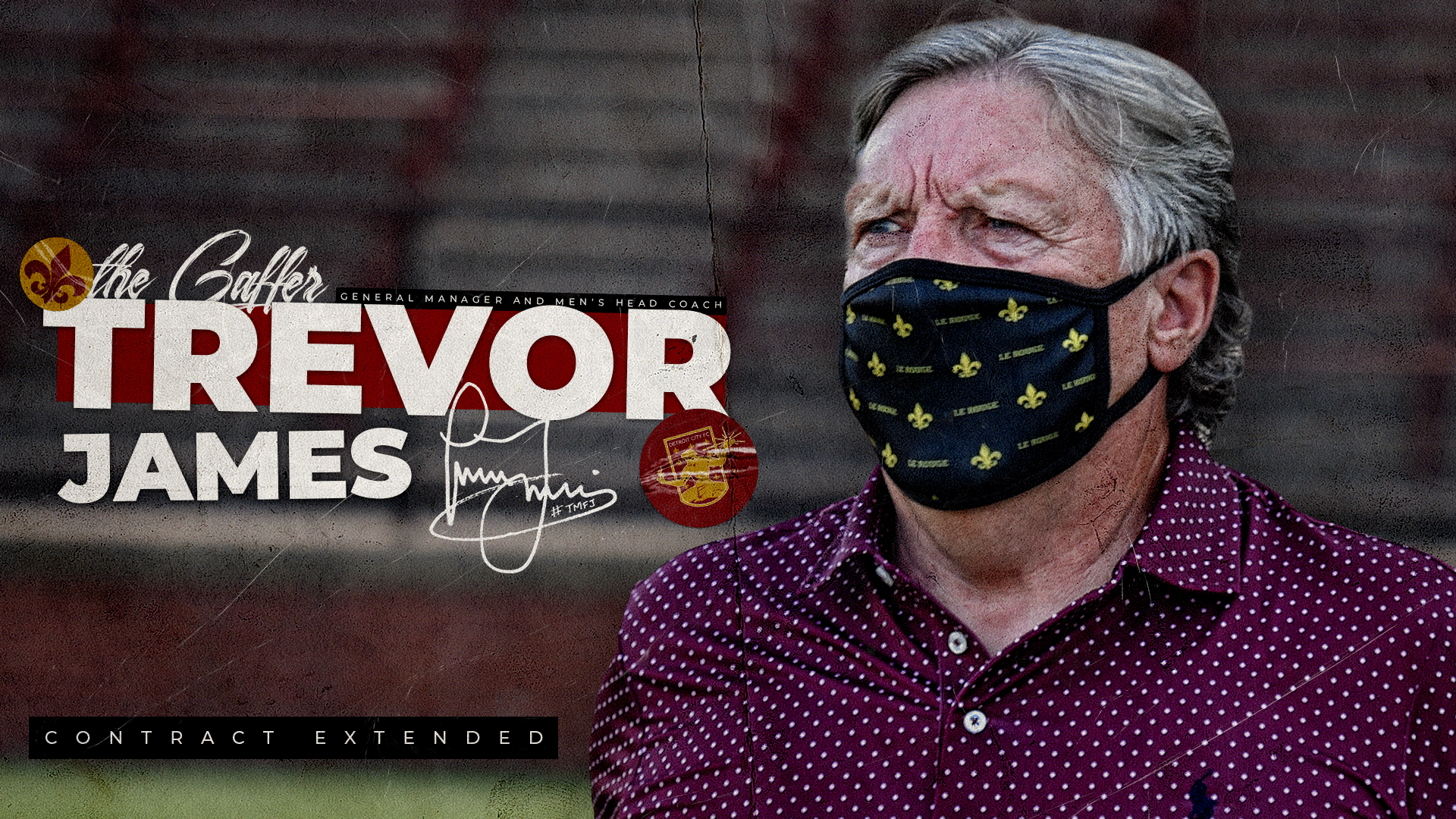 DETROIT, Michigan - The Detroit City Football Club and General Manager/Men’s Side Head Coach Trevor James have agreed to a three-year contract extension. James was announced as the club’s head coach on January 4, 2019.

With James at the helm, City has claimed the 2019 Member’s Cup and 2020 NISA Fall Championship titles.

“Detroit was once known as the City of Champions,” said CEO Sean Mann. “We firmly believe Detroit deserves winning sports teams and Trevor and his teams have brought nothing but trophies to town since he has taken the club to the professional ranks. We’re excited for what is to come over the next three years with Trevor at the helm.”

In the club’s first year in the professional ranks as a member of NISA, the Gaffer led Le Rouge to the Great Lakes Region title of the inaugural NISA Independent Cup. After a 1-2-1 mark in table play, James and City rebounded from a first-match loss in the 2020 NISA Fall Championship Tournament to win four-straight and claim the Fall title, defeating the Oakland Roots 2-1 in the finals. Detroit City FC will host the Spring NISA champion at Keyworth next June.

“Our first year with NISA as a professional club certainly wasn’t what we imagined back in February, but Trevor and (Assistant GM) Tiffany (James) put the health and safety of the players, staff and community first and still came away with a pair of trophies to add to the Clubhouse,” Mann said.

City cemented its Member’s Cup title with a 1-0 victory over the Michigan Stars en route to a two-point edge over the New York Cosmos in the table.

“I feel very fortunate to continue this journey at Detroit City FC,” said James. “I look forward to building on the championship culture we have fostered over my first two years. To the owners, thank you for this opportunity and for entrusting me with your vision. To the players and staff, thank you for your hard work, for believing in the process and for your commitment to excellence. To the supporters, thank you for your unwavering support. You are what makes this club special.”

A date for an exclusive Zoom call with the Gaffer for Gold Card members will be announced in December.

Following his retirement from professional soccer in 1985, James moved into the coaching ranks with stints as staff at Ipswich Town FC and Colchester United before working for Sir Bobby Robson as a freelance scout at FC Barcelona (‘96-’97), Newcastle (‘01-’02), FC Porto (‘94-’96), Sporting Lisbon (‘92) and the England national team during the buildup to the 1990 World Cup.

From 2006-2010, James was Assistant Coach for the Los Angeles Galaxy of Major League Soccer, serving under three different head coaches during his tenure (Frank Yallop, Ruud Gullit, and Bruce Arena), as well as serving as the interim head coach on two occasions. In addition to his first team duties, he was promoted to Director of Player Development where he oversaw the creation and growth of the LA Galaxy Youth Academy.

As one of the most respected and longest serving assistant coaches in MLS, James served as Assistant Head Coach for the Portland Timbers from 2010-2012. From 2014 to 2015, James was the Director of Scouting and Assistant Technical Director for the Chicago Fire before he returned to a coaching role with Indy Eleven of the North American Soccer League (NASL) for the league’s final season. He was named Technical Director of Indy Eleven in 2017 and oversaw the club’s transition to USL.