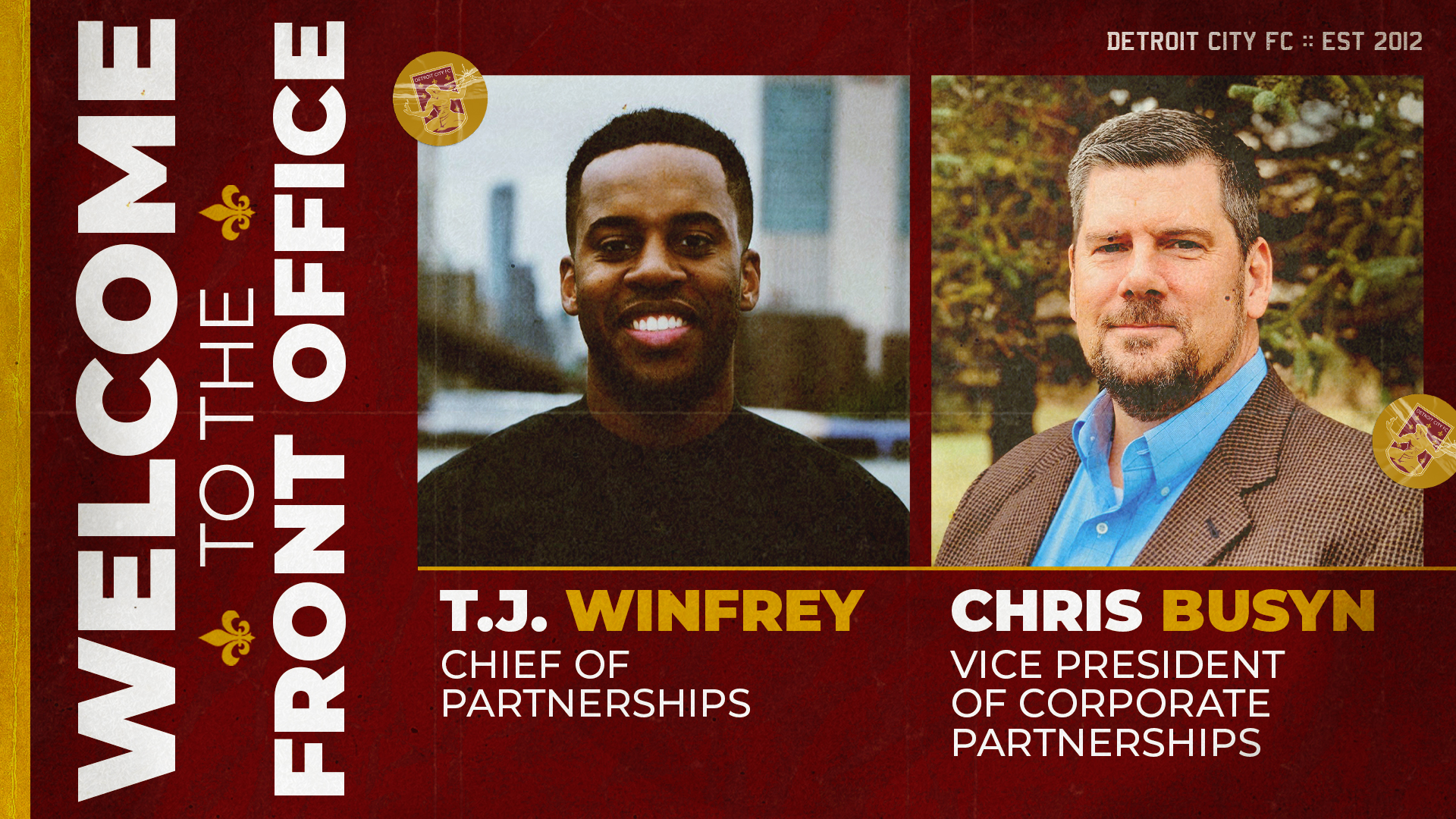 Looking to secure long-term growth, Detroit City FC adds T.J. Winfrey and Chris Busyn to strengthen its local and national footprint and leverage corporate, media and community partners to grow the reach of the Club.

DETROIT, Michigan - The Detroit City Football Club, looking to secure long-term growth and new media opportunities, welcomes T.J. Winfrey and Chris Busyn to the Club in the roles of Chief of Partnerships and Vice President of Corporate Partnership, respectively.

Winfrey comes home to Detroit after spending the past two years with Major League Soccer as the Director of Digital Partnerships.

Busyn has spent the past five years with iHeartMedia as a Senior Account Executive, responsible for selling multi-integrated advertising partnerships for all aspects of iHeartMedia through local and national advertising campaigns as well as the iHeartMedia Digital Platform.

Winfrey will be tasked with overseeing the growth of Detroit City FC’s media partnerships, leveraging corporate and community contacts to grow the reach of the Club, while Busyn will be focused on growing City’s corporate partnerships and television/media assets.

“We are thrilled to add T.J. and Chris to the Club in leadership roles,” said Detroit City FC CEO Sean Mann. “As we look to 2021 and beyond, we felt it was important to recognize revenue needs to deal with the likely ongoing effects of the pandemic as well as take advantage of evolving opportunities for growth in the community and beyond as Detroit’s soccer team.”

Winfrey was active in MLS’ growth on digital platforms, including the likes of 433, Bleacher Report, CBS Sports, ESPN+, Facebook, Overtime, Pluto TV, SendtoNews, Spotify, Twitch and Twitter, into MLS matrix, as well as playing a leadership role with the league's response to social injustice.

Prior to his time in New York with the MLS, the Columbia Business School grad spent time with Courtside Ventures, Madison Square Garden, Microsoft, Nike and Target.

Winfrey’s role with Courtside Ventures focused on vetting a global market of startups in media, sports, gaming and fitness. He researched and presented technology trends for the future of these industries.

Before joining iHeartMedia, Busyn was responsible for selling multi-integrated advertising partnerships for all aspects of CBS Radio Detroit through the Play-by-Play broadcasts of the Tigers, Red Wings and Lions, as well as WXYT-FM  (97.1 The Ticket), WXYT-AM, CBS Radio Events and CBSDetroit.com. In less than four years, the University of Tennessee - Martin grad generated $1.7M in new business.

Busyn comes with experience from the media side, spending nine years with Fox Sports Detroit, the venue side with Michigan International Speedway and Palace Sports & Entertainment, and the team side.

Detroit City FC is in the process of concluding its historic Be An Owner campaign - headlined by punk rock legend Iggy Pop - that saw more than 3,500 investors pledge more than $1.8 million for equity in the Club. On the pitch, City’s men’s team lifted the 2020 National Independent Soccer Association Fall trophy, claiming Detroit’s first professional championship since 2008 in the club’s first year pro. The Le Rouge women’s team gears up for year two in 2021.

Founded in 2012, Detroit City FC has established itself as one of the most talked about soccer teams in North America. The club’s motto, Passion for Our City, Passion for the Game, evokes the three ideas the grassroots organization was built upon: to satisfy the demand for soccer in downtown Detroit, represent the city in a positive light, and build community through the beautiful game. Learn more at detcityfc.com.