Kevin graduated from Central Michigan University with a degree in Marketing and Logistics Management in 2012. He previously worked with the Lake Erie Crushers in Avon, OH, and Delaware North at Comerica Park in Detroit, MI.

Before joining iHeartMedia, Busyn was responsible for selling multi-integrated advertising partnerships for all aspects of CBS Radio Detroit through the Play-by-Play broadcasts of the Tigers, Red Wings and Lions, as well as WXYT-FM  (97.1 The Ticket), WXYT-AM, CBS Radio Events and CBSDetroit.com. In less than four years, the University of Tennessee - Martin grad generated $1.7M in new business.

Busyn comes with experience from the media side, spending nine years with Fox Sports Detroit, the venue side with Michigan International Speedway and Palace Sports & Entertainment, and the team side.

Aaron came to DCFC with a strong background in sales and customer service. He will oversee all ticketing operations and ensure that each supporter feels the love. Anything you need, he's the guy to get it done.

Aaron enjoys travelling and visiting zoos/aquariums, playing with his dogs, and is the 43rd ranked player in his Sunday morning over 30 men's open soccer league (not verified). He is a supporter of all Detroit sports teams, but is especially proud to be working for the most successful one.

Jon DeBoer has been the photographer for Detroit City FC since the team's first season in 2012. Jon is a photographer and graphic designer living and working in Detroit, Michigan. He participated in classes on photography while enrolled at Lawrence Technological University, where he received a Bachelor of Fine Arts in Graphic Design in 2010.

His background in graphic design and interest in architecture has strongly influenced his approach to photography. In 2009, Jon began exploring the city of Detroit and has been photographing the evolving urban landscape ever since. In addition to his cityscape and architectural work, Jon also works as a freelance commercial and event photographer.

Todd Kropp is one of the original founding owners of Detroit City FC. Kropp left the Henry Ford Health System after 12 years to assume a full-time role as the Club's Chief Operating Officer. He oversees finances and operations for DCFC as well as at the City Fieldhouse and City Clubhouse. He also oversees DCFC's youth development and programming.

Kropp graduated from Allegheny College with a BA in Political Science and Mathematics, and he earned a Master's from the University of Michigan in Health Management & Policy.

Sean Mann is a Kansan by birth, a Detroiter by choice, and a graduate of Kalamazoo College. While completing his postgraduate degree at the University of Bristol, he served as a researcher in the United Kingdom’s House of Commons for the Shadow Secretary of State for Culture, Media and Sport. Sean is also an active resident of southwest Detroit, and member of the Clark Park Coalition; all of the above which help him execute his role for DCFC spearheading community and corporate relations for the team.

Katie Tomaszewski joined DCFC in February 2021, but attended her first match in 2016. As social media manager, Tomaszewski is responsible for creating engaging content and expanding the reach of the club's social media presence.

Tomaszewski is a graduate of Wayne State University with degrees in public relations and arts administration. Previously, Tomaszewski spent seven years managing various social media accounts for Wayne State and spent a brief period of her college years as a friend of W, Wayne State's mascot.

T.J. Winfrey joined the front office in November 2020 and  comes home to Detroit after spending the past two years with Major League Soccer as the Director of Digital Partnerships. Winfrey is tasked with overseeing the growth of Detroit City FC’s media partnerships, leveraging corporate and community contacts to grow the reach of the Club.

Prior to his time in New York with the MLS, the Columbia Business School grad spent time with Courtside Ventures, Madison Square Garden, Microsoft, Nike and Target.

Winfrey is a graduate of the Ross School of Business at the University of Michigan and earned an MBA from Columbia Business School.

Friendly the Bear - Director of Mascoting

As the old saying goes, "One person's polar bear costume thrown in a dumpster never to be worn again is another soccer team's mascot." Friendly the Bear joined the DCFC family as the unofficial mascot of Detroit's soccer team in 2014. From his humble beginnings at the base of a waste receptacle, he has become an international sensation, loved and adored by millions around the world. There's even a velvet portrait of Friendly at the Detroit City Clubhouse. Upon seeing the painting, a prominent art collector named Mean Sann estimated its worth as "priceless." Friendly's regular appearances at Detroit City FC friendly matches and community events provides smiles for fans of all ages. His crooked head, questionable stench and lack of pants has led him to be affectionately known as Detroit's Dumpster Bear(TM). Friendly is an integral part of the DCFC culture, and you can support Friendly's polar bear friends and their habitats – which are being impacted by climate change at an alarming rate – at https://polarbearsinternational.org/. 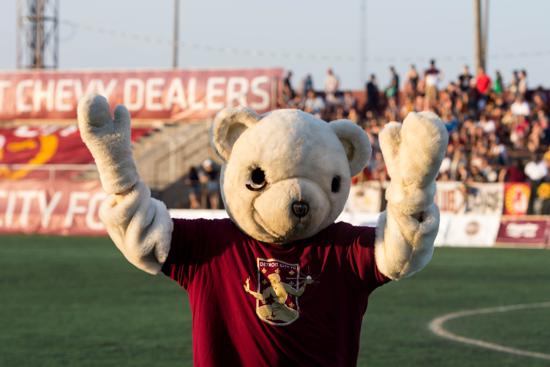